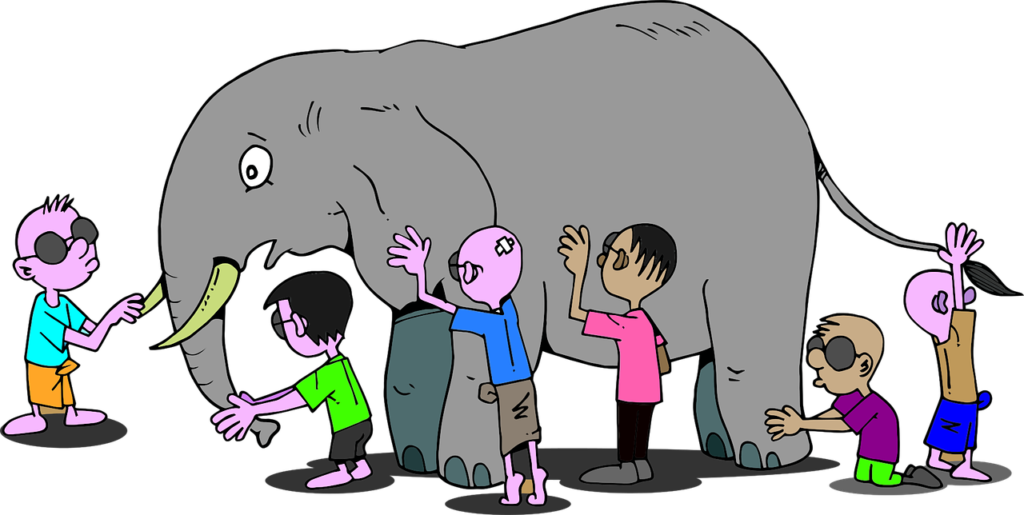 You know that moment when you meet someone and all is going well and then they say something that changes everything?

That thing they say could draw you closer, in which case you feel you’re making traction, or it could throw up barbed wire between you.

For a long time it looked to me that everything would go better if person X, Y or Z would see things the way I do. But the more I understand the inside-out nature of life the last vestiges of this idea has all but lost its grip.

So I thought I’d share what I’ve seen about why we don’t need to see eye to eye to get on with each other famously.

To help illustrate here’s a short re-cap of a popular story of an elephant and a group of curious blind students.

Once upon a time there was a group of blind students who had never come across an elephant before. In a bid to learn more about one of the world’s greatest creatures they agreed to experience what an elephant is like by touching it.

Each student felt a different part of the elephant’s body, only one part, such as the tail or the tusk.

The first one put out his hand and touched the side of the
elephant. “How smooth! An elephant is like a wall.”

The second put out his hand and touched the trunk of
the elephant. “How round! An elephant is like a snake.”

The third extended his hand and touched the tusk of the
elephant. “How sharp! An elephant is like a spear.”

The fourth put out his hand and touched the leg of the
elephant. “How tall! An elephant is like a tree.”

The fifth reached out his hand and touched the ear of
the elephant. “How wide! An elephant is like a fan.”

The sixth put out his hand and touched the tail of the
elephant. “How thin! An elephant is like a rope.”

So it is with human beings. We walk around in bubbles created by our different thoughts based on the way life strikes us. This explains how two human beings can have polar opposite views about the same thing.

But far from this being a dismal state of affairs and give up on ever being able to resolve our disagreements. There is reason to be hopeful.

Let’s go back to the story for a moment… Each student touched a different part of the same elephant. So even though their experience was different each student was in touch with something true about the elephant.

Human beings see things differently but we all come from the same stuff. We are all made of the same energy.

This same-ness about us is our common humanity. It’s the capacity we have for our hearts to beat as one. We see our common heart of humanity rise up in times of tragedy such as the death of Princess Diana when millions around the globe responded with grief and praise.

When we’re faced with another human who’s views are polar opposite to ours it’s never a case of we’re right and the other person has it all wrong. Because every one of us is simply stating how life looks to us based on our thoughts in the moment.

Instead of picking up a cudgel to defend our position we have the opportunity to see that another human’s opinion is a product of the thought-bubble they happen to be walking around in based on the way life looks to them.

If we’re just a little bit willing to see our common humanity in another person, no matter how polar their views are to ours. Just as the students who were willing to touch and be touched by the elephant. Our willingness to touch and be touched by another person’s humanity brings us together and generates a connection that defies all odds of finding common ground when personal opinions point in opposite directions.

This is the way we set our relationship life on a fresh trajectory. Not in a direction based on who’s right and who’s wrong, but in a direction governed by being curious and open to discovering that we’re all One.

This, my friend, is what gives us hope. The kind of hope that rises up from our toes in a goose bump kind of way. Dissolves the walls of made up bubbles we walk around in and opens up our hearts to what is True.